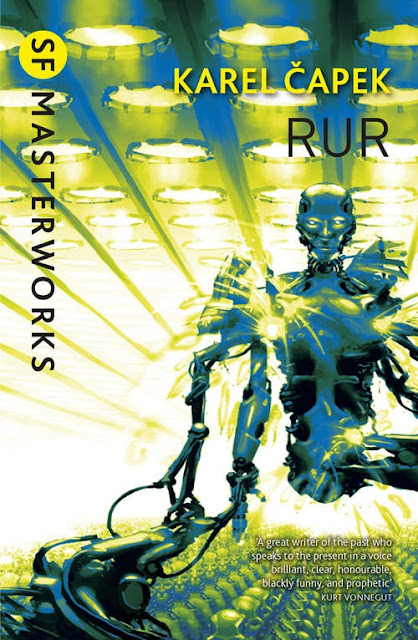 On summer holidays I take the opportunity to dedicate myself to some science fiction classics that I have pending to read. I had heard so much about this theatrical play written in 1920 but this has not prevented me from being surprised in some aspects.

The first part of the book is fascinating, I think it is the most worthwhile for today's reader, the creation of robots and their function to serve humanity. This part shows a clear influence of the current of economic thought of Taylorism and in turn it can be glimpsed a criticism of the unbridled production of consumer goods that ultimately, although it would not lead to a robots revolt, would be one of the triggering factors of the Wall Street Crash of 1929.
Also noteworthy, following the aforementioned industrialist ideas of the time -for example, Taylorism had great influence on the development of the Soviet State-, the dehumanized thoughts by the managers of Rossum Universal Robots and, in contrast, the most humanitarian and secondary role, absolutely sentimental, by the only woman in the cast; although in the end these feelings become more important as a path to a future redemption... I think this female role would clearly influence the woman/robot in the novel and film Metropolis (Thea Von Harbow, Fritz Lang, 1925/1927).
About the second and third parts of the book one must accept them as they are: some dialogues seem absurd to me, or at least incomprehensible in today stardards; it looks like an acid sitcom in which humanity ends up extinguished by its own creations.
In short, a worthwhile reading, a work of great influence on science fiction, inaugurating the subgenre of robots. For example, to take into account -with the permission of Mr. Isaac Asimov and his Laws of Robotics- the magnificent development of some of the issues dealt in this book in The Humanoids (1948) by Jack Williamson.
Publicat per Carlex a 22:27