(Apologies for my English, I’m trying to improve it, thanks!)

Much of what I comment in this review can be read in the first chapter (and I must note that the cover and synopsis of the book reveals more than this review, if you don’t want spoilers do not read it). In short, “Semiosis” explains the colonization of an unknown planet, a planet with a rich ecology. The colonists call it Pax.

The Pacifists, trying to distance from Earth's wars and ecological disasters, organize themselves according to the Pax Constitution that establishes the rules of a non-aggressive democratic society armonious with the nature. But the planet has its own rules, and above all has its own ecology. A very developed ecology, more complex than the one the Earth had in past (and better) times, one in which the living beings have more evolved relationships. For example, semi intelligent animals such as eagles that know how to make fire; or plants that communicate, negotiate and even go to war with each other. 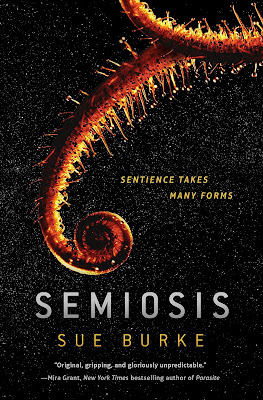 The inhabitants of Pax do not have it easy. A gravity ⅕ higher than on the Earth and a rich ecology of green plants but based on RNA will be very difficult to adapt to. As time goes by, they will lose the technological support that they have been able to bring with them, while at the same time the planet begins to influence them as human beings and also challenges their utopic model of society.

I can not resist to quote one paragraph of the novel:

We awakened, cold and dizzy, with our muscles, hearts, and digestive systems atrophied from the 158-year hibernation on a tiny spaceship. The computer had brought us into orbit, sent a message to Earth, then administered intravenous drugs.

Two hours later I was in the cramped cabin trying to sip an electrolyte drink when Vera, our astronomer, came flying in from the control module, her tightly curled hair trailing like a black cloud.

(The computer has found a more habitable planet and has changed the course of the spaceship).

As I said before, the worldbuilding is in my opinion the best of the novel. An exquisite approach, very well thought out. About the story, if you take into account the various characters that appear in the course of time, it is a choral novel. In addition, it must be said that the author manages to dodge the “bucolic trap”, although there are times when the development of the plot is a bit tricky, but the growing symbiosis between the terrans and the ecology justifies it.

Regarding to the story, I have found it at all times interesting, with good moments of intrigue but others a bit predictables. Also, I consider that successive characters along the story are well developed, although the evolution and motivations of a key figure in the plot are not clear enough.

The novel is the first of a duology, but this is a standalone story. So, Semiosis is an enjoyable example of the good science fiction that is being done in recent years, while also it maintains a classic sense of discovery. I recommend it (and you must read it if you want to know the meaning of the title ;-).

Although it is a totally original novel, to get an idea it have evoked me these other readings: The Dispossessed by Ursula K. LeGuin, or the also excellent Dark Eden by Chris Beckett. This book also made me think about Bios, an interesting work by Robert Charles Wilson.

Publicat per Carlex a 21:37 No hay comentarios: