This is a “re-re-re-read”, but all the previous ones were a long time ago, when I was a young space cadet, so it has been an almost new experience because there are many details of the plot and characters that I didn't even remember. 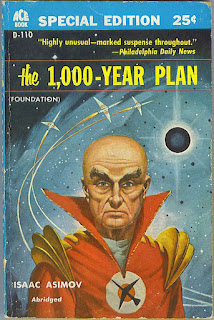 Of course, there are issues in this novel published in 1951. The technology is outdated, but it surprises that how is well imagined: holos 3D, personal force shields, ray guns and some spaceoperesque gadgets that in today's science fiction stories are still used. Another issue is, mmm... Asimov and the women, so they have a insignificant role in all this story.

I had this novel highly valued in my youth, now of course things are different., but I still consider Foundation as a great milestone in the science fiction history by the fascinating things it manages to evoke: an empire that occupies the entire galaxy, the psychohistory theory... Excelsior!

Note to think about: the similarities in the Foundation expansion and the relations with its neighbors and the Culture series by Iain M. Banks.

Publicat per Carlex a 20:38 No hay comentarios:

Publicat per Carlex a 22:05 No hay comentarios:

I assume that you know this story more by the two films (released in 1964 and 2000 respectively) than by this novel, which in my opinion is excellent.

Fail-Safe is a classic political fiction novel set in the Cold War but it can also can be considered as a thought experiment about the limits of the military menace between two superpowers (today, you can think for example in India & Pakistan, or of course about Mr. Trump and China).

To emphasize in this book, written in an effective "bestseller style", I think that the tension of the atomic threat in the political and military levels in the US is very well described. In this regard I must indicate the fascination that causes me that the development of the plot happens in about an hour, from the first and insignificant failure to the end. About the characters, correct in their respective roles.

Written in 1962, the plot is set in 1967, so I assume the novel has a bit of technology fiction, for example in the defense systems of the impressive bomber Convair B-58 Hustler; but this does not detract the merit of being a great warning about the political and military irresponsibilities of contemporary national states.

Publicat per Carlex a 12:37 No hay comentarios: