(apologies for mistreating the English language)

Crazy, seductive, dizzy, frustrating at times but also with some great ideas... I would need many more adjectives to review Ada Palmer’s novel.
I admit it, in the first chapters (I have reread them three times) I seriously considered to give up, but at last I think the effort was worth. 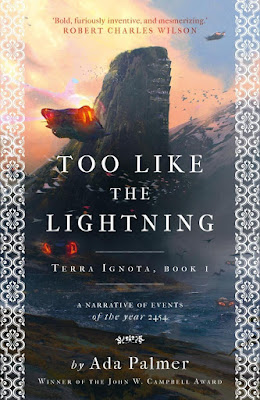 The author imagines a very detailed and full of nuances (politics, etc.) future society set in the twenty-fifth century. It reminds me another fascinating book, The Golden Age by John C. Wright: both books seduced me intellectually but I could not read them passionately; by an excess of information, I suppose. Also that both novels are set in a sort of utopic future, a Golden Age. In Too Like the Lightning there is a future without nation-states, without wars; and an universal cheap and fast transport. Really, it looks utopic, but… (...but nothing, because spoilers ;-).
For me, the principal criticism is that Ada Palmer’s first novel is excessively confusing. For example, the novel has a lot of characters, and some of them have two or three different names, so I consider it an unnecessary game of hide-and-seek for the reader, for me at least; and as consecuence of this the pace of the novel suffers a lot. On the other part, the novel deserves a reading because this is one of the more fascinating worldbuildings that I have read lately: bizarre but also coherent in its own framework.
The story ends with a cliffhanger so I buyed the second book and I will read it “in a not distant future” (for now I have had enough and I want a more lighter reading).
Publicat per Carlex a 22:00 No hay comentarios:

Empress of Forever, by Max Gladstone 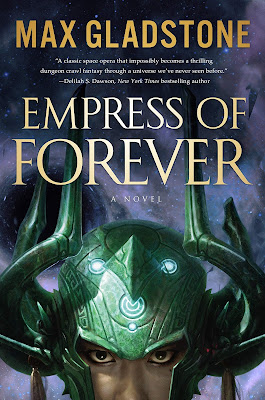 Imagine that all the information in the universe can be apprehended and therefore used; for example for traveling great distances by an integration in a sort of hyperspace. Imagine a galaxy in which anyone can connect with this informational aether, can interact with it, and more, anyone have a part of themself in this galactic cloud, that is, like a “soul” (and incidentally it provides a solution for the traditional problem of how to understand the alien languages). Anyone except… our protagonist, Vivian Lao, a genius millionaire from our planet Earth.

Now, put aside everything I have told you. What I have commented is awesome, "senseofwonderful", but this is only the background: what deserves to stand out above all is that this that it is purely good space opera.

That is, apart from the well developed worldbuilding, some events in this novel are simply absurd, but this is why we call it space opera, doesn't it? In other words, Empress of Forever does not pretend to be "serious" science fiction, in space opera it must prevail above all the adventure and the enjoyment of the reader.

I must say that Mr. Gladstone is a competent writer. Maybe this novel is a bit longer than it should be, but only a little, because I enjoyed the surprises and the plot twists, the dialogues, and also the characters, these coherent enough to tell us a great galactic adventure.

As an extense novel that this one is, we can search for a lot of influences: the grandeur of a galaxy full of information like Vernon Vinge's A Fire Upon the Deep and Dan Simmons' great Hyperion saga; also about an heroine estranged from Earth, like John Carter on Mars or Buck Rogers; and it reminds me also some superhero stories, galactic variant, like Guardians of the Galaxy… It does not really matter, Empress of Forever has sufficiently originality of its own to be a good and very entertaining science fiction novel.
Publicat per Carlex a 20:32 No hay comentarios: