(I am aware that there could be some mistakes in this review. I’m trying to improve my English, thanks)

As I said in a previous review I love monster movies. So when I knew that Hella was a planet with giant dinosaurs in it, I bought it the same day it was published. The fact is that I had a wrong (or rather uninformed) expectation of the novel. Hella is clearly a young adult book and this not the style of novel that I was expected. About this I must clarify that there are the good YA and the bad or poorly written ones, and fortunately Hella belongs to the former.

As a first issue to consider, in a science fiction the worldbuilding is an important part of the fun, and more in this book in which the author delights the readers with detailed info-dumps about the planet and about how the colonist must have to adapt to it. For example, the day in Hella has 36 hours and the author manages an ingenious way to adapt to this cycle. They are a lot of details like this one and for me this is very good, Hella has a lot of things to offer and it is the main theme on which the first half of the novel is based. Thus, the reader can enjoy the awe of discovery, or in other words, the sense of wonder by the most straightforward route.

Hella and the colony’s community are introduced and explained in first person by Kyle, the main character who has an Asperger-like syndrome. You know it is a resource frequently used in science fiction -for example Mr. Spock or the android Data in the Star Trek series-: “I don't understand humans (or adults) so I must learn how they works and explain it to the readers/audience”. By the way, to Kyle and his handicap this means a sort of coming of age, first knowing the planet’s ecology and then about the colony troubles.

Unfortunately when we reach the middle of the read the things are turning ugly, both for Kyle & friends but also for the reader, because the main plot becomes something else entirely different. It starts with the arrival of a new Earth’s starship, which brings an artificial intelligence along with a new group of settlers. From then on the argument evolves towards the internal problems of the colony and how Kyle and his friends deal with them, so bye bye to the fascinating ecology.

In summary, mostly the great things of Hella are the planet itself and the colony-building, the new society that is being born according to Hella's ecology. About the main story, I can not consider it flawed but it is disappointing because as I said the book becomes quite a different thing. Also there is the young adult issue: with the good and bad people clearly defined, the exaltation of friendship and some typical teen plot twists. About the conflict that arises, I must say that the political positions that both sides represent are interesting, in a way Earth's problems are spreading to the new society they are trying to build.

As you can see in this case my review is more subjective than usual so it is possible that it do not serve as a reference, so you must read more reviews. For example this one by Paul Di Filippo in Locus Magazine reviews it rather more favorably: https://locusmag.com/2020/07/paul-di-filippo-reviews-hella-by-david-gerrold/

Publicat per Carlex a 11:54 No hay comentarios:

The Road by Cormac McCarthy

A land devastated by nuclear winter, or some kind of mass extinction? That is one of the keys to The Road (2006), the reader does not know what has happened. Apparently no one knows. Actually it does not matter, the case is a continent -or the whole planet? - absolutely ruined, without sun, without animals or plants, without food and cold, very cold... So nowadays this novel, with the knowledge we have and what we know we are not avoiding, gives us plenty to think about, both of what can happen and what we can lose. 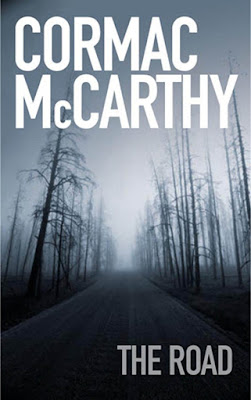 The novel focuses on a father - a man, no matter what his name is - who tries to save his son. So the novel deals about paternity (or maternity of course) and what parents do/would do in a situation like this one (you also can imagine a war, in which you are forced to flee and seek refuge in another country, walking a great distance through a desert landscape or crossing a sea in a precarious boat). All of us who know what parenthood means are aware of that we would do anything to save our children and that we would face the most adverse circumstances, even - which is worse - if we have lost all hope. It is in our genes and it is in what makes us human.
During the journey, often the best answer the man can give at his son is "I don't know". The only certainties he has is that humanity has returned to a kind of hobbesian state of nature (or maybe worse) in which everyone seeks food and shelter, and they struggle to take it away from others because there is not enough for all; and that he tries to save him moving southward in a belief that the weather can be somewhat better.
Years ago on my blog I asked the readers to make a list of the best science fiction novels and to my surprise this one was the most valued. Of course I added it to my extensive list of pending to read books; although similar to another very crude novel such as Flowers for Algernon by Daniel Keyes, I waited years to have a suitable frame of mind to read it. Over time I discovered that this suitable state of mind does not exist, but in any case I recommend you to read this masterpiece if you have not yet.

If you have curiosity, this is the list (the post is from 2014 and it is in Spanish) of the best novels so far in the 21st century.

Publicat per Carlex a 18:23 No hay comentarios: