The Blue World by Jack Vance

If you have read some of my previous reviews you will realize my taste for aquatic science fiction (among other things). Well, here is another aquatic world, this time from the grand master Jack Vance. 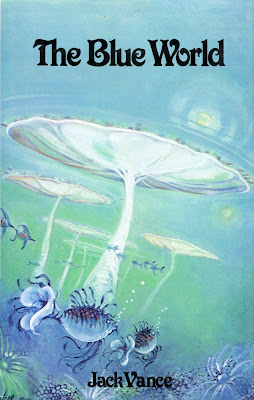 As usual in the author, the most remarkable thing about this novel is an interesting worldbuilding. Let me explain: a totally aquatic planet in which human beings inhabit a species of giant water lilies and that they have built (that is, that the author has imagined) a society perfectly adapted to this environment. In a world without seasons, with a pleasant climate for humans -but for example without metals-, in which time is measured in generations since the original starship crashed into this sea world. Of course, in this society a conflict arises and… oh, wait!, there is the Kragen, a sea monster that threatens this peaceful existence (I have told you that giant monsters are another of my favorite issues?).
To my regret I have not read as much as I would like of Jack Vance's books but I think I glimpse some patterns. Apart from the worldbuilding that I have already mentioned, there are the characters who seem a bit eccentric to me, and among them there is the iconoclastic hero who wants to fight an unjust system. About the characters, I do not know exactly what to think. They are a little weird in their behavior, they are so… insubstantial or one-sided; even the hero who is supposed to be the better depicted; and yet they manage in some way to captivate you, so I really don't know what to think.
In short, there is war, yes, but in the quiet way the author typically describes, and there is also adventure and discovery, all based on this magnificent world without name. So with these ingredients it is easy to get a very entertaining novel that in addition is a standalone story, contrary to the sagas that the author has us used to.
Publicat per Carlex a 15:18 No hay comentarios: