So finally I have read my first Man-Kzin Wars book. In this case, an introduction and a short story written by Larry Niven himself, The Warriors. A novelette, Iron by the master Poul Anderson and the novella Cathouse by an unknown writer (at least for me), Dean Ing. 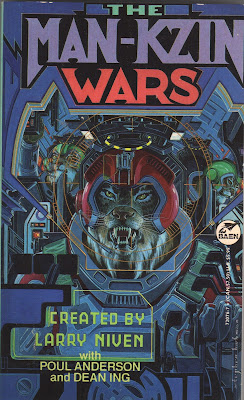 Enjoyable science fiction, pre-information age style (the book was published in 1988); well planned and correctly written; space opera stories with a lot of details: they have a notable hard component, specially Poul Anderson’s.

Actually I consider that Dean Ing’s story is the best. Cathouse deals with the psychology of its characters: Carroll Locklear, a survivor of a space battle that has left to his fate among the Kzin, first as a captive and then as a companion on an unknown planet. To highlight the character of a female kzin, which Locklear calls Miss Kitty.

It was not the first alien-cat-like story that I have read. I am thinking about Satan's World (Polesotechnic League series) also by Poul Anderson and of course Chanur, by C. J. Cherryh (Chanur Saga), both they are good works. In our case, as I said I am also delighted by the very interesting and well depicted Kzin characters.

In summary, I enjoyed it and I want to read more of this series. By the way, the Man-Kzin Wars XV will be available in February.

Publicat per Carlex a 19:35 No hay comentarios: