Gods and Robots: Myths, Machines, and Ancient Dreams of Technology by Adrienne Mayor

Publicat per Carlex a 21:27 No hay comentarios:

I receive this book from Netgalley in exchange for a honest review, so here we go:

Sea Change in one phrase: In a near future, Renata Black is an illegal activist who fights for her cause despite her own personal circumstances.

I could seem that the author’s personal life is involved in the story. Well, all the authors do this to a greater or lesser degree. In this novel -narrated in first person- you can notice this in the personal issues dealt: divorce, the loss of the loved ones, the stubbornness of not giving up… But in second thought I think that this explanation is better: Renata Black is a very well developed character. 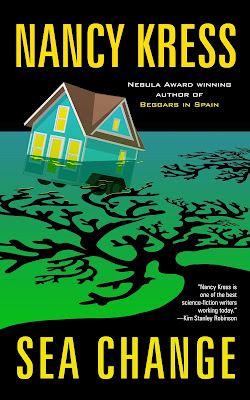 So, the novel can be understood as a good picture of the future quotidian life in the USA after a catastrophic event and I think this is a positive aspect. However, I do no like it. Why? I am not sure, maybe it is about the proportion of personal life/science fiction in the story. In both ways it's interesting, I do not deny this, but together, for me at least, it doesn't work completely.

On the other hand, although at a first glance the main premise of the book may look a bit absurd -there are a lot of stupid things in our world, and they exist and they rule our lives-, actually this is the best part of the book, the issues in which Nancy Kress excels. I mean her accurate hard future speculation due both to her scientific knowledge and her incisive imagination. These are some of the topics dealt: genetic modified organisms vs. natural crops, the danger about a genetic engineering in capitalism, irreversibility of climate change and how to deal with it, power abuse vs. civil society activism and the enemies of liberty (fear, ignorance & fanaticism).

Finally I must note a good aspect and two complaints about this novel. About the former, the absence of bloodshed: violence is not necessary to explain a good story. On the latter: Nancy Kress plays the deus ex machina card in the usual computer hacking way and second (a minor one), the USAcentric perspective, but I understand that this is a lot to explain in a short novel.

You can read another review about this author here.
Publicat per Carlex a 22:37 No hay comentarios:

A History of Jet Propulsion, Including Rockets by Raymond Friedman

The ebook is expensive, but I was very interested in this topic and there was no better alternative. However, the book is worth it because it meets completely my expectations and I enjoyed a lot reading it.

Raymond Friedman is an engineer and you immediately realize it by his direct and efficient style, and because he manages to explain in a practical way physics concepts such as the essential Sir Isaac Newton’s three laws of the movement applied to flight and space or advanced concepts such as specific impulse or escape velocity . 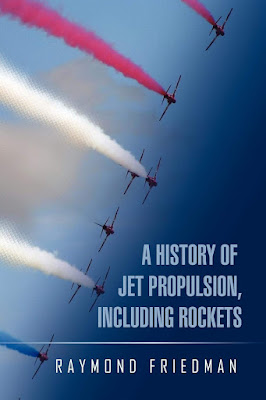 In a few pages the book deals with many topics. Among other things of the principles of flight, types of jet engines and rockets, the combination of fuels/propellants to choose in each case, types of satellites, and at the same time a succinct history of each of these advances.

Being two different themes, aircraft and missile propulsion by jet or ramjets, or rocket propulsion, in its varied military and civil applications, on our planet or outside it, the book justifies by humanity's need to dominate the air, and what is its extension, space.

In this sense, the author extends his technological explanation to the usefulness and scientific and/or economic justification of the expansion through space and dedicates part of the book to achievements such as the Hubble telescope or the ISS International Space Station. It also offers a few expectations about what to expect in the short, medium and long term future, mainly in the exploration of our solar system.

The book also has three appendix about Newton’s Laws applied to jets and rockets, the mathematics of rocketry and space travel and selected biographies of major contributors to jet propulsion and rocketry.

Published in 2010, I think that the only flaw that I see in this work is that it is written before the Elon Musk era with his reusable rockets and ambitious projects.

Publicat per Carlex a 20:02 No hay comentarios:

A Calculated Life, by Anne Charnock 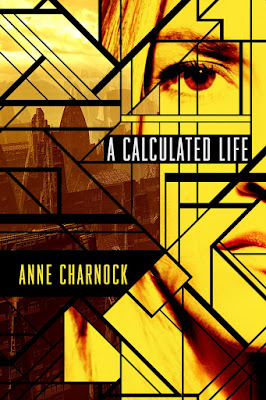 A Calculated Life (2013) is an interesting novel that shows us the daily life of an artificial person. Narrated in first person, this novel tells the experiences of the protagonist, Jayna, who belongs to a series of artificially created human beings in support of what is known as white collar jobs. In Jayna's case, she works in a data mining agency, with a rate of success above her human companions. So Jayna’s series is an attempt to combine the power of an AI with the qualities of a human being.

The author uses contrast as a method to show us the central theme, which of course is the meaning to be human. The novel shows Jayna’s daily routines and concerns and the coexistence with her peers, both humans and simulants (that is what they are called in this novel). Although it can also be said in reverse, the novel allows us to reflect of what happens when we lose our humanity in a society that makes us part of an economic process in a double way, as alienated workers and at the same time as consumers.

Of course, this is not the first time this issue has been discussed. The comparison with Bladerunner (more the film than Philip K. Dick’s novel) is evident, but it reminds me of a novel whose reading I have to resume some day (sigh here), Nekropolis by Maureen McHugh.

About the near future described by the author, apart from the replicant-style synthetic people, there is nothing really innovative: a future in which we will be ecologically and also economically poorer, at least most of society (if we exclude an elite of the upper class), which it seems that it will be confirmed in the short or medium term. A realistic future, we could say.

The perspective of Jayna, a unique and irreplaceable human being for whom we empathize, makes the reading worthwhile.

Publicat per Carlex a 16:52 No hay comentarios: 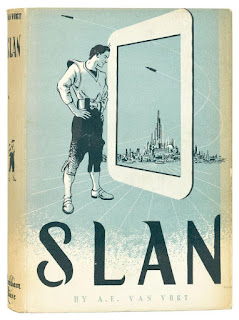 As a lot of classics this novel could seem a bit silly to the current reader: the female characters, some aspects of the plot, and of course the state of the art of science and technology.

However, Slan has good ideas, for example when the author imagines a society in which some humans have superpowers (telepathy, intelligence, strength, etc) but at the same time they must hide and protect themselves from different superhumans, so I understand that this novel was acclaimed in its time.

Slan was published in 1940 and made a lot of fans. The “proto-geeks”, if I may say so, daydreamed to be the main character: socially unfit but in a sense superior to others, to the extreme that in science fiction fandom it was often said: Fans are slans!

In summary, an interesting reading from one of the pioneer science fiction authors.
Publicat per Carlex a 17:24 No hay comentarios:

Oryx and Crake, by Margaret Atwood

In a few words: Oryx and Crake is a nightmarish/transhumanist/literary (or mainstream) novel. 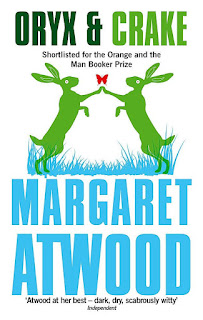 Of course a book by Margaret Atwood deserves much more than a simple sentence, so I will try to expose it in this -also unfairly brief- review.

It is well known that we, science fiction fans, are accustomed to visiting fantastic worlds through rational ideas and (more or less) well-constructed worldbuildings, but we must remember that this can also be shown by literary means, as in this case.

Mrs. Atwood makes a good science fiction approach, with a vision of our future based on a climate disaster and an irresponsible genetic engineering. But I think that the aspect in which the author really stands out is about "how"she tells us the story. That is, simplifying again, her literary talent. In this sense, the story is well developed, the characters are very well depicted and I can say that I have savored all the reading. 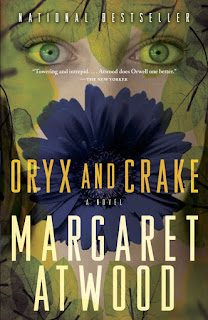 Returning to the science fiction approach, about the "novums" of the novel, reading it sixteen years after the first publishing, the novel loses some novelty. You know, things change very quickly; and the themes developed by this novel have also been mentioned in other apocalypticworks, previous and later. However, I must point out that, in the main, science fiction assumptions remain as bold as plausible in the actuality. In addition to climate change and genetic engineering, some topics discussed in the novel are: the trend of a fragmented future society in more segmented socialclasses (that is, more rich and more poverty), and also a criticism about the mass media and the Internet, which can -or have- become dangerous. The author shows us this in the MaddAddam game that gives name to the trilogy.

The case of Margaret Atwood is not very common, an author who manages to position herself between the mainstream and the fantastic genre unfortunately is not very frequent. I admit that I don't know if I will read the rest of the Maddaddam trilogy, at the moment I have enough for this apocalyptic future, and I also have The Handmaid Tale in my pending to read list.

Publicat per Carlex a 16:17 No hay comentarios:

The Menace from Farside, by Ian McDonald (#Luna series)

In a way, it is true what is said about this short novel: that Ian McDonald collects the leftovers of the splendid trilogy of Luna and makes this story; but a rather entertaining story I can say, based on the great work that is the worldbuilding of the previous books. 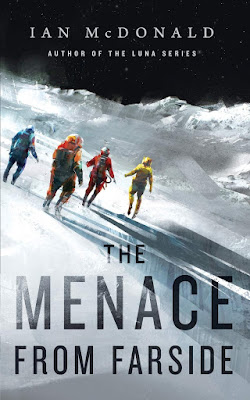 The plot is about an adventure of four young not so friends in the Moon surface and, you know, Lady Luna knows a thousand ways to kill you: In other words, it's like the 1986 movie Stand by Me, a story of coming of age style. At some point Ian McDonald seems to laugh at himself, I assume that referring to some negative criticisms received about the trilogy - for example, the author "threatens us" with a cake, or the frequently mention of the word telenovela - but as I said the novel is at least entertaining, and for me its main defect is that this short novel loses if we compare it with its bigger sisters.

In short, considering the literary quality of Ian McDonald’s prose, a minor work from him is preferable than a good one by some other authors.

Note: I love it when the cover illustration of a science fiction novel reflects its content helping the reader imagine the story, something that is not so frequent.
Publicat per Carlex a 21:06 No hay comentarios: